The unit is defined as the amount of illumination the inside surface of a 1-foot radius sphere would be receiving if there were a uniform point source of one candela in the exact center of the sphere. Alternatively, it can be defined as the illuminance on a 1-square foot surface of which there is a uniformly distributed flux of one lumen. This can be thought of as the amount of light that actually falls on a given surface. The foot-candle is equal to one lumen per square foot.

The lux (symbol: lx) is the SI unit of illuminance and luminous emittance. It is used in photometry as a measure of the intensity, as perceived by the human eye, of light that hits or passes through a surface. 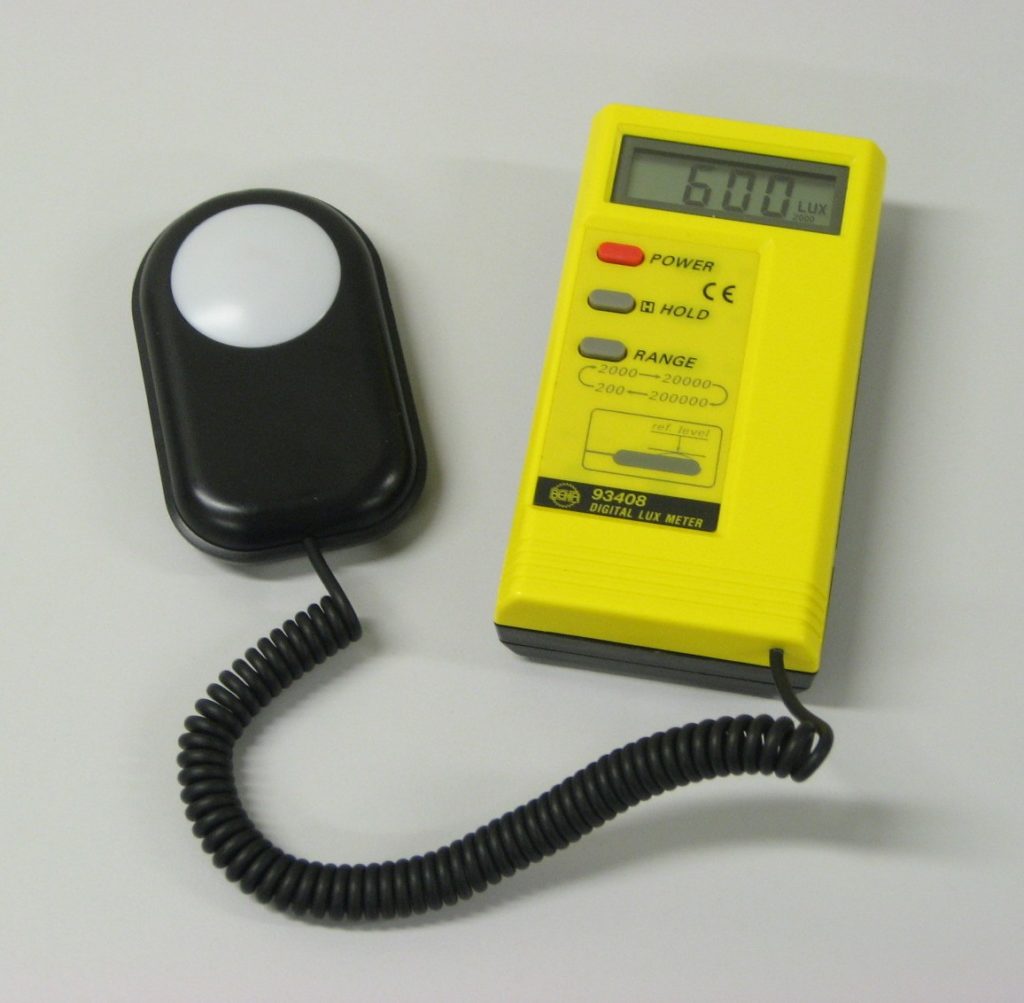 The difference between the lux and the lumen is that the lux takes into account the area over which the luminous flux is spread. A flux of 1,000 lumens, concentrated into an area of one square metre, lights up that square metre with an illuminance of 1,000 lux. However, the same 1,000 lumens, spread out over ten square metres, produces a dimmer illuminance of only 100 lux.
Achieving an illuminance of 500 lux might be possible in a home kitchen with a single fluorescent light fixture with an output of 12,000 lumens. To light a factory floor with dozens of times the area of the kitchen would require dozens of such fixtures. Thus, lighting a larger area to the same level of lux requires a greater number of lumens.

One footcandle ≈ 10.764 lux. The footcandle (or lumen per square foot) is a non-SI unit of illuminance. Like the BTU, it is mainly only in common use in the United States, particularly in construction-related engineering and in building codes. Because lux and footcandles are different units of the same quantity, it is perfectly valid to convert footcandles to lux and vice versa.
The name “footcandle” conveys “the illuminance cast on a surface by a one-candela source one foot away.” As natural as this sounds, this style of name is now frowned upon, because the dimensional formula for the unit is not foot · candela, but lumen/sq ft. Some sources do however note that the “lux” can be thought of as a “metre-candle” (i.e. the illuminance cast on a surface by a one-candela source one metre away). A source that is farther away provides less illumination than one that is close, so one lux is less illuminance than one footcandle. Since illuminance follows the inverse-square law, and since one foot = 0.3048 m, one lux = 0.30482 footcandle ≈ 1/10.764 footcandle.

In practical applications, as when measuring room illumination, it is very difficult to measure illuminance more accurately than ±10%, and for many purposes it is quite sufficient to think of one footcandle as about ten lux.

What’s the Difference between CAT5e and CAT6?